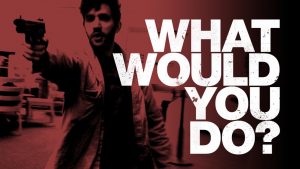 Q: What tends to be the motivation behind an active shooter/sniper? And what is the thrill or goal?

A: Active shooter incidents happen for a range of reasons. There are however, trends and pre-incident indicators that typically lead to such an incident and fall within several categories.

Victim – Whether they were bullied (any kind of environment), domestic dispute, or someone they know was a victim

Mental Illness – Typically this in itself isn’t a pre-incident indicator that would result in someone becoming an active shooter, however mental illness with other environmental pressures may lower the cognitive barrier to someone justifying the act.

Q: How to Survive? Can people survive this situation, and how? Run? Scream? Try to take down the shooter?

A: The answer is – it depends. Situational awareness (knowing your environment, entrances, exits, windows, potential weapons, finding cover/concealment, etc) lends a lot on whether an individual should run, hide, or fight. In addition, the expectation of success of any such action should be judged. Lastly, before a decision is made, victims should take in to account the M.O. – perhaps they are not the victim in a domestic or robbery related active shooter incident and the best way to survive is comply.

Q: Should you instantly play dead or try to run? Obviously every situation is different.

A: Playing dead may or may not work – especially out in the open. It is always advisable to find cover/concealment than being in the line the fire.

Q: Are there differences in how to survive based on, say, a closed setting like a classroom or office or movie theater versus being outdoors and there’s a chaotic crowd? Should you run zigzag?

A: ZigZag running just means you will take longer to get where you want to go and isn’t an industry recognized method of escape. When you discuss different scenarios, you need to against establish the M.O. are you likely to be the person they are interested in attacking or not?

Q: What kinds of skills do I need to survive an active shooter incident?

A: Strong awareness of your surroundings, a fluid plan based on solid core principles, and some physical ability.

Q: What kind of gear do I need to survive an active shooter incident? For example, what kinds of things should I always carry on me? And the second part of that is, what can be made into survival gear during the incident?

A: You should always carry your phone, wallet/ID, and keys. In the event of an incident, it isn’t advisable to try to carry things out with you – just leave your stuff where it is and run. As far as weapons – anything can be an improvised weapon. Hot pots of coffee, scissors, forks, bottles, lamps, chairs, etc.

Q: If you have interviewed people who have survived, what have they said they did? What advice did they have? What have we learned from their story?

Q: What happens when things calm down and law enforcement is clearing the scene? If I were a victim or witness, what can I expect are the things that will happen next?

A: Everyone will need to be interviewed extensively so the LEOs can piece together the incident.

Q: And what happens to the scene next?

A: It is processed fully for evidence and then cleaned up.

Q: Is there a “famous” active shooter incident that maybe you often cite as an example of what went wrong and what went right, and lessons learned so that people might be able to survive a similar incident today?

A: Columbine changed how law enforcement handles active shooter incidents. The methodology prior was responding officers create a strong perimeter and wait for SWAT. Since Columbine, police have been trained and equipped to work in small teams as they arrive to locate and neutralize the threat.