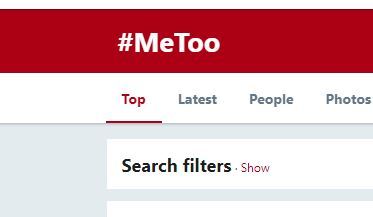 Per the Producers Guild of America, who is looking to expel Harvey Weinstein after the numerous reports of sexual assault and rape that have been raised over the last week: “Sexual harassment of any type is completely unacceptable. This is a systemic and pervasive problem requiring immediate industry-wide action. The PGA calls on leaders throughout the entertainment community to work together to ensure that sexual abuse and harassment are eradicated from the industry.”

The Weinstein stories that have poured into media outlets have instigated a massive social media campaign: #MeToo. This movement, started by actress Alyssa Milano this morning on Twitter, aims to recognize all women who have been victimized by sexual assault, sexual harassment, sexual abuse or rape. #MeToo is critical to the ongoing security conversation on sexual violence, workplace violence, bullying and active shooters.

AEGIS Security & Investigations has staked its interests in preventing active shooters, and we consistently look to pre-incident indicators that can be reported long before a violent situation becomes deathly. One of the largest behavioral indicators is victimization. Active shooters in numerous situations, especially those at schools and in the workplace, have been linked to bullying and harassment wherein the shooter identifies as a victim.

Sexual violence on a personal level is intolerable. No person should have to face it nor be victim to it. When it seems there is no way out, people may resort to excessive violence. In this blog, we look at what sexual violence is, why it is not being reported en masse, how to report it, how to prevent it, and what to look for before one victim produces numerous victims.

The Rape, Abuse & Incest National Network (RAINN) defines sexual violence as “an all-encompassing, non-legal term that refers to crimes like sexual assault, rape, and sexual abuse.” These acts aim to harm a person sexually and physically and are often linked with other forms of abuse, including intimate partner (domestic) violence and sexual assault.

The reasons for sexual violence are varied and often poor excuses for the perpetrator to seek power in the abuse of the victim. Nonetheless, it is a type of violence that affects hundreds of thousands of people. According to RAINN, one person falls victim to sexual assault every 98 seconds in America. As we have seen in the #MeToo campaign, a majority of the victims are women — RAINN estimates 90 percent of all sexual violence victims are female.

Sexual violence is one of the most under-reported forms of abuse. For those who have experienced it, the acts are unforgivable and often unspeakable. Victims have many reasons for not reporting, including fear of losing a job (particularly for workplace sexual harassment), fear of the situation becoming worse (like the cycle of intimate partner violence), fear of not being able to escape (again, common with IPV), and even fear of being judged as the party at-fault by those in whom they confide. In an article published at the height of the 2016 Presidential Election, CNN highlighted yet another Twitter campaign, #WhyWomenDontReport, in which personal testimonies unveiled the fear of reporting sexual violence as a victim.

While there is a lot of scholarly research on this topic of barriers to reporting sexual violence, there has not been a lot of sustained buzz about it. Nonetheless, there are numerous societal barriers to be aware of and avoid:

There is a lot to discuss here, but the reality of reporting sexual violence is dependent on the victim’s situation.

Generally, reporting sexual violence to law enforcement will be the best step. RAINN has a lot of information on how reporting is beneficial not only to the victim but to society: check it out.

Obviously, this is not an easy task. People around the world have sought to end sexual violence for decades. In America, the movement to end all forms of violence has been an ongoing struggle of reporting and educating that has once again been brought to fruition in light of Hollywood’s latest black mark.

The main goal for all prevention is accurate education. We need to educate children, teens, adults, employees, employers, and anyone else who will engage in a relationship with another human that could become sexually violent about the topic. Knowing what it looks like and how to stop it are critical elements to understanding it.

The Center for Disease Control (CDC) recommends starting and maintaining sexual violence prevention programs at all levels. RAINN take a more personal approach, explaining that being a bystander is not enough and offering strategies to help friends in need before and after sexual violence is encountered. Essentially, we all need to step-up to stop sexual violence.

One effective response from #MeToo has been #IWill. You can join the campaign in your social media by telling the world what you will do to stop sexual assault.

Sexual violence who touches one person in a community touches everyone. Even if you are not the victim nor the perpetrator, you may be a friend, family member, colleague or person of authority who can fall victim to the effects of sexual violence.

Help is available for victims; sadly, not every victim is able to seek help. Those who fall into the latter category often experience self-harm or look to harm others. This is when we see increased incidents of active shooters at schools and in the workplace. While the victim may not be the perpetrator in these cases, the initial perp may take further violent steps to continue harming the victim or take revenge for a victim’s report against them.

Active shooter situations have steadily risen since the start of the millennium, according to the Federal Bureau of Investigation, and are projected to continue to increase. (For a list of 2016 mass shootings, click here.)

Lethal Intimate Partner Violence, a form of sexual violence, has affected numerous workplaces and schools across the country, including at North Park Elementary in April. Think about this: “The Department of Labor reports that victims of domestic violence lose nearly 8 million days of paid work per year in the U.S., resulting in a $1.8 billion loss in productivity for employers.” What share of that is your workplace taking? Additionally, an astounding 21 percent of full-time employees identify as IPV victims.

Adults are not the only ones affected. According to the Center on Disease Control, 1 in 10 teens reported to a survey that they had been physically injured on purpose by a significant other. Paired with bullying, sexual assault in schools poses a great threat to students. Bullying has been linked to active shooter thoughts and actions that have played out in active shooter incidents like Columbine and Sandy Hook.

College campuses have also seen and addressed a rise in student-related sexual assault and rape. This has led many to create and implement threat assessment teams. Reports that are released after such instances show the need for university threat assessment teams to act as a key measure in preventing violence before it happens. Additionally, these teams should be trained in behavioral assessment and threat management. Such management is also beneficial in workplaces and can be provided in active shooter trainings.

The civilian active shooter training provided by AEGIS is intended to build on “run, hide, fight,” the long-standing method of saving yourself in these events. Workshops run from an hour to several hours dependent on the needs of the organization and individuals. Our most highly sought after workplace violence training program is our one-hour plus add-on Run, Hide, Fight Live Fire Demo; participants begin with a lecture and basic training on how to handle the situation and are then exposed to sample scenarios in which they practice those same skills. The effectiveness of this scenario can be viewed when on CBS here.

Anyone can become a victim of sexual violence. If you see something, say something — you should talk to people you trust and who trust you if you witness an assault against them and if you have been assaulted. Find the resources that are available to you at your school, workplace, organization, community, etc. Know that you can always turn to law enforcement to report sexual violence. Know that you are not alone in the battle against sexual violence.